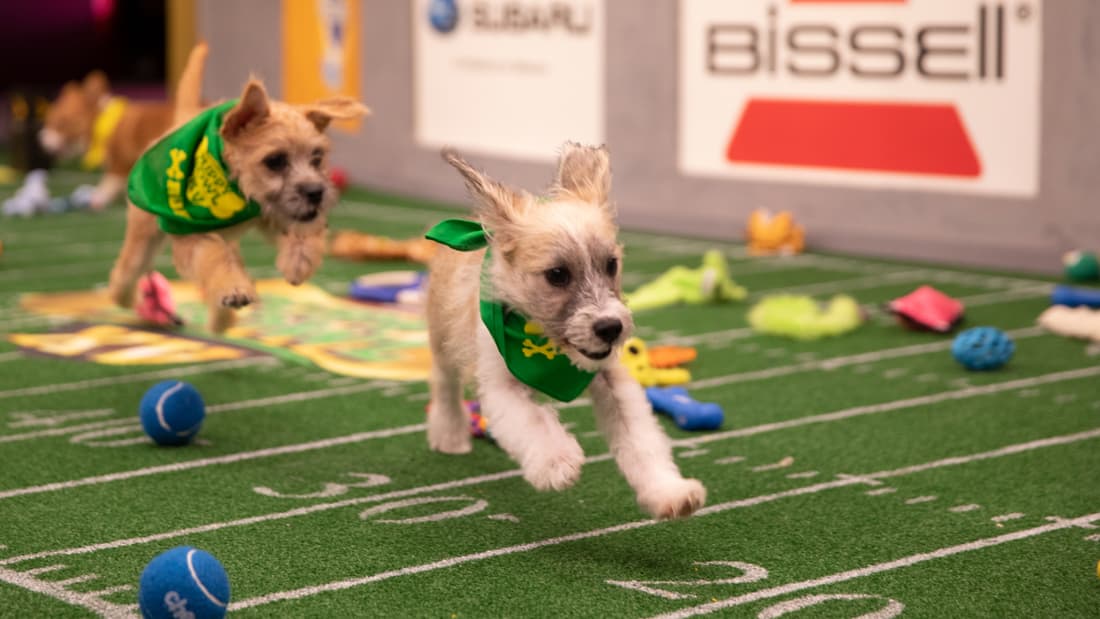 The prospect of cancellation is a very real fear for most, if not all, TV shows. The axe will surely fall eventually, but WHEN? With our team of network sources and insiders, we have the very latest news on whether Puppy Bowl is cancelled or renewed? Our handy cancel/renew tracker will keep you up to speed on the status of discovery+ TV show Puppy Bowl!

-Jonathan and Drew Scott, Whitney Cummings and Emmylou Harris Get in on all the Puppy Bowl XVI and Dog Bowl III Action-

The pup players are back and ready for non-stop all football action for PUPPY BOWL XVI! Television's cutest sports competition and original TV adoption event, PUPPY BOWL, returns to Animal Planet Sunday, Feb. 2 at 3PM ET/12PM PT. This year's adoptable puppy players who make up the rosters of #TeamRuff and #TeamFluff celebrate a 'Sweet 16' extravaganza and dig deep and play hard to win the inaugural CHEWY "Lombarky" trophy at GEICO stadium.

To celebrate 16 years of incredible adoption stories and tail wagging touchdowns, PUPPY BOWL XVI unleashes more puppy players than ever before in all-new new team colors - from yellow and green to 'Bark Blue' and 'Tail Mary Tangerine'. Tune in for this special two-hour event to experience sloppy kisses, puppy piles & penalties, epic puppy playtime, and more. Animal Planet audiences will also see the return of The Dog Bowl, the one-hour competition for adult and senior dogs living in rescues and shelters. In past years, 100% of the puppies and kittens that have participated in PUPPY BOWL have been adopted to loving families. And after sixteen years of this incredible tradition, this year's set of adoptable animals all end up winners when they touchdown on the field and, finally, into their forever homes.

The tail-gating starts with the PUPPY BOWL Pre-Game Show at 2 PM/ET and 11 AM/PT, featuring fan favorite aww-nalysis and cuddly commentary from sports correspondents, including the one and only Rodt Weiler, James Hound, and Sheena Inu serving as pre-game show analysts. This year, Animal Planet worked with 61 dedicated animal shelters and rescue organizations representing over 25 states, filling the TEAM RUFF and TEAM FLUFF roster with over 96 adoptable puppies, making this the biggest and most epic game in PUPPY BOWL history!

While many of the PUPPY BOWL XVI pup players have come from shelters and rescues across the U.S., this year's PUPPY BOWL has more international puppies than ever before with players representing Cartagena, Colombia, St. Croix in the U.S. Virgin Islands and Toronto. With the help of testing conducted by WISDOM PANEL(TM) canine DNA, all the puppy athletes go beyond fur-deep to find out what they're really made of and discover what skills are engrained as a result of their ancestry, and what advantages they can use on the field.

As always, Animal Planet audiences will enjoy their favorite PUPPY BOWL elements featuring slow motion replays, nose to nose action from the iconic water bowl cam and the fan favorite PEDIGREE(R) puppy kiss cam. Viewers will also get an up-close look at the pre-game rituals of these special pups via the Locker Room Cam, where we'll see the new PUPPY BOWL locker room featuring the new team colors! And this year, we'll also see a brand-new HOME DEPOT training room space for the pup players to prep ahead of the big game! Fans won't miss a moment of excitement with a front row seat view of the touchdowns through the cameras in the CHEWY end zone pylons, in addition to aerial shots of the field through the TEMPTATIONS(TM) Sky Box, and the official Puppy Bowl Blimp. And once again, Surge the hamster takes the wheel to power the PUPPY BOWL scoreboard.

This year's PEDIGREE(R) Starting Lineup presents puppies who are also going paw to paw to compete for the individual BISSELL(R) MVP (Most Valuable Puppy) by scoring the most touchdowns with dog-approved toys by CHEWY. Returning to the field for his ninth year as America's favorite "Rufferee," Dan Schachner, along with award-winning animal advocate and television correspondent Jill Rappaport, who introduces the SUBARU OF AMERICA, INC. Pup Close and Personal segments that allow viewers to dive deeper into some of the heartwarming stories of these adorable athletes.

This year's Pup Close and Personal profiles include actress, comedian and animal rescue advocate Whitney Cummings who has teamed up with Love Leo Rescue in Los Angles and picked Jack, a Chihuahua mix for game day; Lucca, a Chihuahua / Miniature Pinscher mix from Texas Chihuahua Rescue picked by Jonathan and Drew Scott of HGTV's series 'Property Brothers: Forever Home' who are not only helping clients make the best of their home but making their dreams come true by adding a forever friend to their family; and Sol, a Chihuahua / Border Collie mix who made the brave journey back to the U.S to play in the big game with our very own Dog Bowl host, Jill Rappaport, who teamed up with Colombian-based rescue Cartagena Paws, an organization that relies heavily on volunteer flight companions to send them to homes in the US. Other in-depth profiles include Filbert, a deaf and sight impaired Shetland Sheepdog mix from Double J Dog Ranch, a sanctuary for dogs with special needs; a special trip to the beaches of St. Croix with Cruzan Cowgirls, a rescue focused on rehabilitating rescue horses where we'll also meet PUPPY BOWL player Rummy, a Chihuahua mix; Aspen, an Australian Cattle Dog / American Staffordshire Terrier mix from Rocky Mountain Puppy Rescue in Colorado who will put his paws on a hiking trail for the first time with Instagram famous hiking rescue dog, Finn and his human, Henry Friedman; and Maverick, a Dachshund / Pekingese mix from Virginia Beach SPCA who not only found his forever family but also a forever doggie home when the Norfolk Botanical Garden put on their 'Barkitecture' event.

PUPPY BOWL XVI will also feature five special needs players that are looking forward to finding their forever home; including Ferris, a three-legged Labrador Retriever mix; two hearing impaired pups - Kismet, a Great Dane, and Paprika, a Chihuahua mix; Filbert, a blind and hearing impaired Shetland Sheepdog mix; and Rooster, an American Staffordshire Terrier /Bulldog mix with a cleft palate. These fuzzballs won't let anything deter them from playing hard and finding a loving family! As always, viewers are ready for a cuteness overload from the official PUPPY BOWL XVI cheerleaders, a trio energetic baby pygmy goat and a trio of playful armadillos, who root for their favorite team while shaking their pom poms on the sidelines! The first half of PUPPY BOWL XVI is sponsored by SCOOB! from Warner Bros. Pictures.

Halfway through the game, the energy will be amped up for the ARM & HAMMER(TM) Clump & Seal(TM) KITTY HALF-TIME SHOW. There's no other way to celebrate 16 years of animal adoptions than with an unforgettable performance by legendary divas Jenni-PURR Lopez & CAT-ira, who will arrive to the GEICO stadium in a decked-out limousine to give Animal Planet audiences a special rendition of 'Catnips Don't Lie!' At the end of the performance, viewers will even be able to see an adoption update on where these talented & sassy felines found their forever homes.

PUPPY BOWL fans will have the chance to watch an early premiere of the PUPPY BOWL XVI Pregame Show on Jan. 26 on Animal Planet GO. Broadcast of the event will also be available on GO in conjunction with the 3:00pm ET/ 12:00pm PT start time and unlocked at 5:00pm ET/ 3:00pm PT. Viewers will also be able to celebrate the incredible people who put animals before themselves in our new mid-form series "Road to Puppy Bowl," launching on Jan. 2. Additionally, for the first time ever, viewers can tune-in to the GEICO Puppy Bowl Draft, to get an early look and the top picks for TEAM RUFF and TEAM FLUFF. Crowds can flock to the Animal Planet and PUPPY BOWL Facebook pages while also following the action to players in real time on Animal Planet's Twitter and Instagram feeds.

PUPPY BOWL digital audiences can point their paws to AnimalPlanet.com/PuppyBowl to view the roster of adorable puppies in the PEDIGREE(R) Starting Lineup. Viewers can additionally head to Facebook, Instagram, Twitter, and YouTube for original social content including the PUPPY BOWL pygmy goat cheerleaders getting "pumped up" before the big game, discover what our Kitten Halftime kittens really do in their downtime in a MEOW wrestling match and a Billiards competition, and a special interview with Instagram sensation @TheDogist.