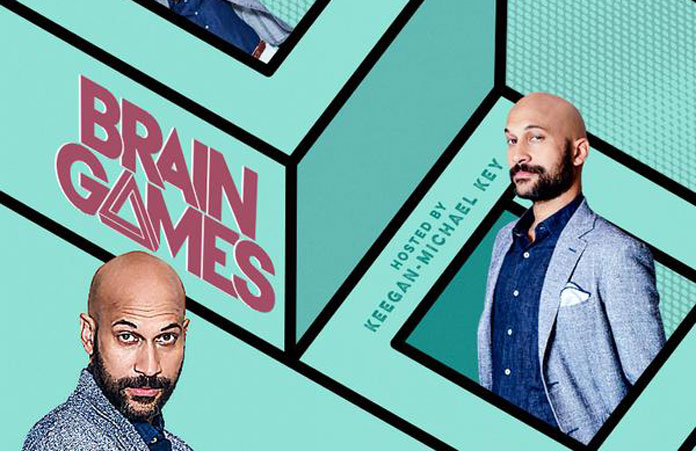 The prospect of cancellation is a very real fear for most, if not all, TV shows. The axe will surely fall eventually, but WHEN? With our team of network sources and insiders, we have the very latest news on whether Brain Games is cancelled or renewed? Our handy cancel/renew tracker will keep you up to speed on the status of Nat Geo TV show Brain Games!

Produced by Magical Elves, an additional season of BRAIN GAMES, with Keegan-Michael Key returning as host, was greenlit ahead of its new season debut. Shot in front of a live studio audience, BRAIN GAMES challenges some of the world's biggest celebrities to realize their special brain power through fun and highly entertaining interactive games, illusions and social experiments that will reveal the "why" behind the "wow." On Monday, Jan. 20, at 8/7c with two back-to-back episodes, BRAIN GAMES launches with everyone's favorite Hollywood couple, Kristen Bell and Dax Shepard, going head-to-head in the "Battle of the Sexes," a series of games designed to reveal how men's and women's brains differ; then immediately following at 9/8c, Emmy- and Golden Globe-winning Ted Danson learns how our brains distinguish fact from fiction.

The new season of BRAIN GAMES is packed with the world's biggest celebrities, including Tiffany Haddish, Drew Brees, Jordan Peele, Meghan Trainor, Anthony Anderson, Tom Hanks, Tim Allen, Jack Black, Mark Cuban, Kevin Hart and Rebel Wilson. With the help of host Key, along with world-famous mentalist Lior Suchard and field correspondent and neuroscientist Cara Santa Maria, each episode delivers shocking revelations on the science of our brains and surprising explanations behind why we do what we do, making it a television event for the whole family. Join in on the fun as BRAIN GAMES reveals the incredible science of what makes our brains tick!

Using a series of experiments, illusions and man-on-the-street demonstrations, host Jason Silva and guest experts unlock the science behind the mysteries of why we say, eat, feel and act as we do with episodes on topics ranging from memory and common sense, to morality and the paranormal. Through an intricate series of interactive experiments designed to mess with your mind, we reveal the inner-workings of your brain. Hailed by critics as "tremendous fun" that "makes science entertaining," Brain Games turns your mind's eye inwards for a fascinating journey into the three and a half pounds of tissue that makes you... you.